The daily life of an Executive Chef sounds wonderful. We picture them in their well-pressed, spotless chef’s whites, topped with the requisite achromatic “toque blanche” chef hat.

The rich smells of their finest creations fill their nostrils as they oversee the sous chef and their assistants feverishly preparing dishes for the frenzy of a lunch rush.

Truth is, it’s not all glitz and glamor.

To hold the highest hierarchal post in the kitchen, one requires an exceptional sense of timing, preternatural efficiency, the ability to communicate complex creative processes to a team of cooks seamlessly, and this is before the food preparation even begins. 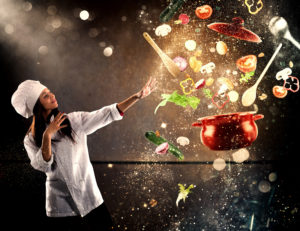 Chefs, professional bakers and culinary artists all need a baking liner that checks all the boxes.  The run-of-the-mill parchment paper available at chain grocery stores will not suffice. On the five-star level of food prep, a type of super parchment is necessary, and that’s why Genuine Vegetable Parchment checks all the boxes.

Unbleached GVP is chlorine-free and created with prime refined pulp, while spared of the spoils that impurities such as starch, gelatin and casein can create.  To a certain extent, what makes GVP superior to regular parchment is what it doesn’t have; as it is made with no additives and composed entirely of cellulose, the main constituent of plant cell walls.

Genuine Vegetable Parchment performs as well as common pan liner parchment but with added perks and benefits. With GVP, you get the best of both worlds in one premium package.

For chefs, each new dish presents a chance to raise their acclaim. However, a delicacy disaster can produce the opposite effect.

The chef’s job is a precarious one, they must balance a wide array of processes while ultimately ensuring that their product is sumptuous, healthy and allergy restrictive. With GVP, you ensure the proper piquancy, aroma and palatability intended by the culinary artist.

For all of GVP’s many advantages, the simple fact that it can be cut to fit a myriad of different sized pan liners cannot be overlooked. This size adaptability is crucial, as pans come in many different shapes and configurations.

When steaming fresh fish and farm-raised chicken En Papillote, the GVP can be crafted to match the size requirements of the protein and its accompaniments.

Genuine Vegetable Parchment is ideal in higher baking temperatures.  Chef’s won’t run the risk of scorching the liner and compromising the taste.

This also ensures that crispness is intact and the proper moisture levels are assured. A consistent and properly displaced heat surface is a hallmark of five-star food preparation.

Whatever your conviction to convection might be, GVP should not melt or incinerate even in high heat applications such as Turbo Chefs, so long as you follow the manufacturer’s exact guidelines.

Grocery store bought parchment does not provide professional grade heat resistance and lacks the same level of release of Genuine Vegetable Parchment. Even the slightest of singes to parchment can compromise the overall taste experience.

Unbleached GVP is 100% free of dioxins that may be present in bleached parchment. It is an easy pick as the safest food preparation liners on the market.

Waste reduction as a form of eco-awareness can have a lasting positive impact on our environment, and it doesn’t have to be difficult or time consuming.  GVP is reusable and each time you choose to not to discard it, the waste footprint is reduced.

GVP is frequently used during the cooking process to lower the level of contaminants present on cooking surfaces.  Specialty Packaging INC. created a GVP package as a multi-use tool for 7-Elevens across the country.  With this unique packaging option, the customer is presented with a freshly prepared sandwich in a grab-n-go setting, where the GVP has been present throughout the entire food prep process, reducing the times the food has been handled, ensuring a highly sanitized cooking surface and ensuring an easy cleanup for the employees.

GVP packages are also excellent for use with warm food offerings.  Specialty Packaging developed a series of packages for the preparation and presentation of fresh cookies for Delta Airlines that maintain their warmth for their in-flight clientele.

With Specialty Packaging’s GVP paper, the cross-contamination of allergen threats are reduced substantially as food items can be prepared and delivered in just one package.  Whether the food is prepped in a Turbo Chef at high temperatures or on a cutting board to be later stored in a cooler, GVP is an ideal material for allergy-sensitive customers.

At Specialty Packaging INC our primary focus is to make GVP even better, by researching and developing GVP to convert into a myriad of forms to better improve specialty packaging.

To learn more about our unique packaging offerings please feel free to reach us via our website, or give us a call at 1-800-284-7722. Our customer service experts can also assist you via info@specialtypackaging.us